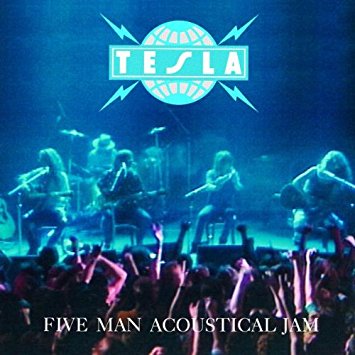 Five Man Acoustical Jam is a live album released in 1990 using acoustic guitars instead of the electric guitars for which hard rock/heavy metal bands such as Tesla are traditionally known.

The biggest hit from the album was the song “Signs”, a cover version originally from the band Five Man Electrical Band, who also had a hit with the song (Tesla’s version included a use of “fuck” not in the original version). Other songs included “Love Song” and “The Way It Is” (hits from their previous album The Great Radio Controversy) and covers of The Rolling Stones’ “Mother’s Little Helper”, Creedence Clearwater Revival’s “Lodi”, and The Beatles’ “We Can Work It Out”.

It was recorded live in Philadelphia, Pennsylvania, at the Trocadero Theatre during a short run of acoustic shows organized to fill downtime while supporting Mötley Crüe on a leg of their Dr. Feelgood tour.

As interviewed in Ultimate Classic Rock about the album:

Although the Bay Area rockers had scored a Top 20 hit with their most recent album, 1989’s The Great Radio Controversy, and notched their first Top 10 pop single with “Love Song,” they were still pretty much like any other act on its first couple of records — which is to say they were deeply in debt to their label and touring as a support act for a better-known band, in this case Mötley Crüe. Faced with an empty week on the calendar and wanting to use the downtime to make his clients money, manager Peter Mensch booked a short run of club shows.

“Our manager wanted to keep us out on the road and not send us home for that week,” guitarist Frank Hannon told Ultimate Classic Rock’s Matt Wardlaw. “Mötley Crüe had a week off, it was on the Dr. Feelgood tour. We were playing all of these rockin’ shows, and there was a week where there was, like, no shows. And rather than going home and spending all that money it takes to go home, our manager said, ‘Hey guys, you played acoustic over at this other gig, why don’t you try playing a couple more?’ So, that’s what we did. So, we practiced some of the songs and stuff.”

Along with their own growing collection of originals, the band members decided to work a handful of covers into the set list for the acoustic shows, which were set up at a handful of small clubs around the country, including Boston, San Francisco, and Philadelphia. According to singer Jeff Keith, it was Hannon’s idea to cover the Grateful Dead’s “Truckin’,” which they worked into a medley with their own “Comin’ Atcha Live,” while his bandmates added their own choices.

Crediting his Oklahoma upbringing with introducing him to the Five Man Electrical Band, Keith told UCR that he suggested covering their 1971 hit “Signs.” “They said ‘Hey, get a copy, we’ve never heard it,'” he recalls. “[Guitarist Tommy Skeoch] wanted to do something like the Rolling Stones’ ‘Mother’s Little Helper.’ [Drummer Troy Luccketta] was born in Lodi and just this major Creedence Clearwater Revival fan, so we covered ‘Lodi.’ Just had a lot of fun with it. Of course [bassist] Brian Wheat, with the Beatles being his biggest inspiration, we did ‘We Can Work It Out.’ Next thing you know, we all pick a track and they all stood out in their own ways.”

The song selection may have developed organically, but the arrangements occasionally represented a bit of a struggle. “Some of the songs we stripped down completely,” says Hannon. “When it was just me and Tommy and Jeff by ourselves with the guitars, playing it real stripped, ‘Modern Day Cowboy’ was difficult. I actually broke a string, I believe, on that song in the middle of the guitar solo on that live version. That one was a tough one. The other one, again just came spontaneously, ‘Comin’ Atcha Live,’ it was my idea to kind of just turn it into a boogie-woogie. Then we were just jamming at practice and the beat sounded so reminiscent of the Grateful Dead’s ‘Truckin” that I just started singing ‘Truckin’,’ kind of goofing off with it and they liked it so we turned it into a little medley. That was fun, but we had to work on that a little bit to figure out — because if you listen to that Grateful Dead song, there’s about 12 verses to the f–ing song.”

Working up their version of “Signs” proved a particularly fateful turning point when the band performed it live in the studio during a radio appearance during their stop in Boston, setting in motion a chain of events none of them could have foreseen.