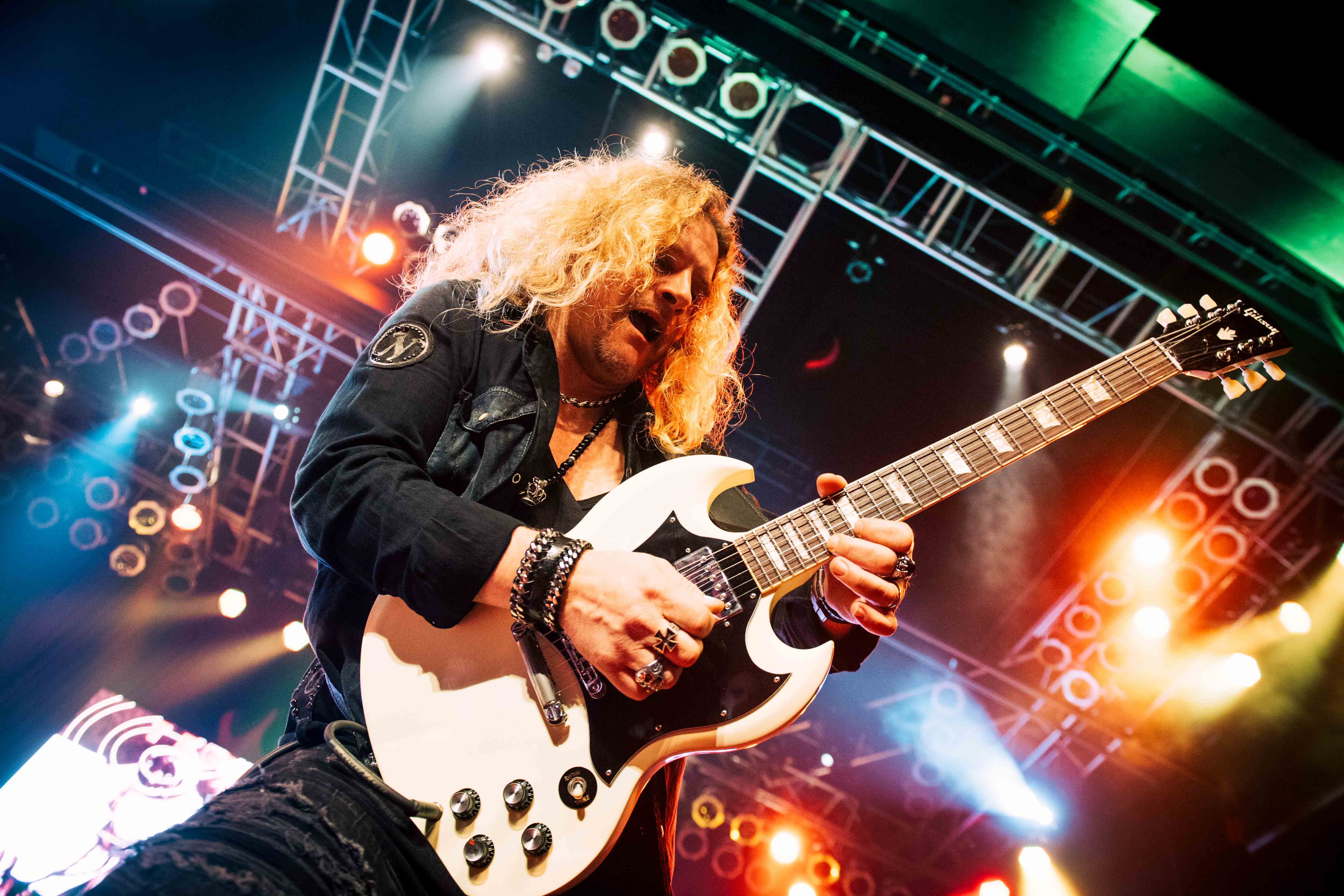 Birthday: October 3, 1966
Birthplace: Sacramento, California
Instruments: Electric & Acoustic Guitars, Mandolin, Backing vocals
Favorite Foods: Speghetti, Indian,
Favorite Cars: Dodge Charger, RAM truck
Favorite Sports: Cutting Horses, martial arts
Favorite Colors: Black, Blue, Purple
Favorite Books: Biographies
Favorite Subjects: Music & History
Favorite Movies: Old Westerns, The Virginian
Favorite Actors: James Drury, Audie Murphy, Clint Eastwood, Chuck Norris
Favorite Places: Chicago, San Francisco, Ft. Worth TX
Favorite Escape: Horses, Walking, Biking
Things you don´t like: Assholes, Liver, Thieves, Tax Season
How do you spend your spare time: Working with Horses, Writing Songs, Studying Guitar,
Have you had another career that wasn’t in the music industry? No other career but other jobs doing labor, building, tree service, landscaping
Any other band’s you have been in? Kaleidoscope, MoonDogMane, Frank Hannon Band, Earthshaker, City Kidd
What was the first album you purchased? VH1, Are you Experienced, Frampton Comes Alive, Johnny Cash Live at Folsom prison
When did you start to play music? 1976
What other instruments do you play? Piano, Bass, B3, Mandolin, Flute, Harmonica
What artists are your favorite to listen to? Beatles, Stones, Zep, Dead
Which artist might surprise your fans that you listen to? Grateful Dead, Snoop Dog
Who are your musical influences? Everyone from Johnny Cash, Hendrix to Jerry Garcia
Have you ever met or played with your musical idol(s)? Yes – w/ Lynyrd Skynyrd, Dickie Betts, Pat Travers, Rick Derringer
When did you know you wanted music to be your career? When I was 10 I saw a band playing at a party
Who helped you get (your foot in the door) in to the industry? Ronnie Montrose, Steve Clausman, Brian Wheat, Tom Zutaut, My Grandparents

The story is that Frank broke his leg one summer and learned to play guitar while he was in a cast. Hannon started playing guitar and writing songs when he was 10 (1976). He joined/started the band Tesla at age 19 but had also played with and produced many artists. He uses guitars such as Gibsons preferably his ’96 Cherry SG, ES 335, Les Paul Goldtops, Doubleneck 12/6 strings and acoustics and he uses a Dove, J50. Hannon later learned to play piano from his mother at a young age. He also played the B3 organ, Bass Guitar and Drums. As the years rolled when Tesla started he and other band mates met Jeff Keith on a local radio station.

Hannon formed a band called Moon Dog Mane, who released one album in 1998.

In 2005 Hannon released his first solo effort Guitarz from Marz, released exclusively through his website frankhannon.com